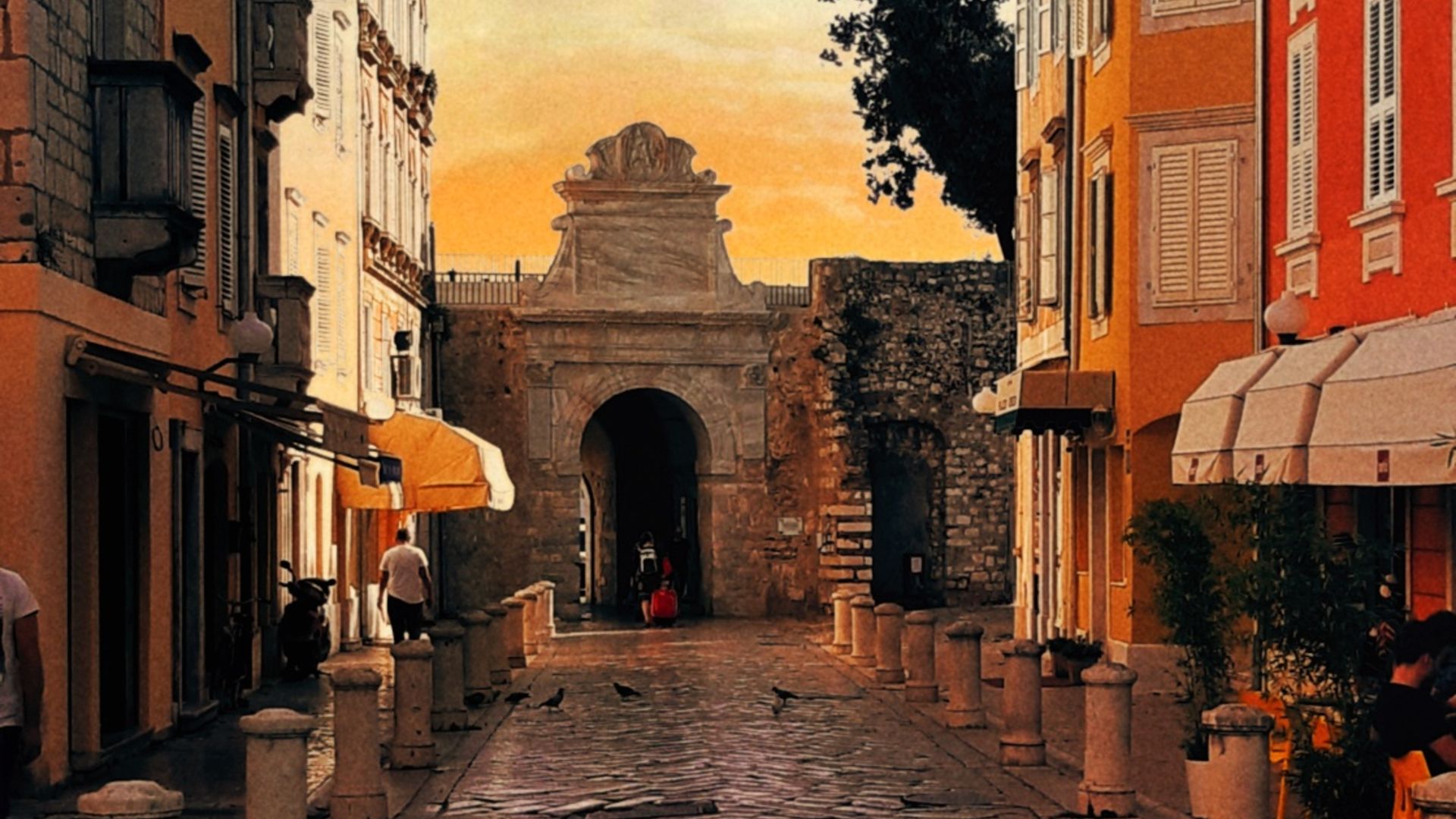 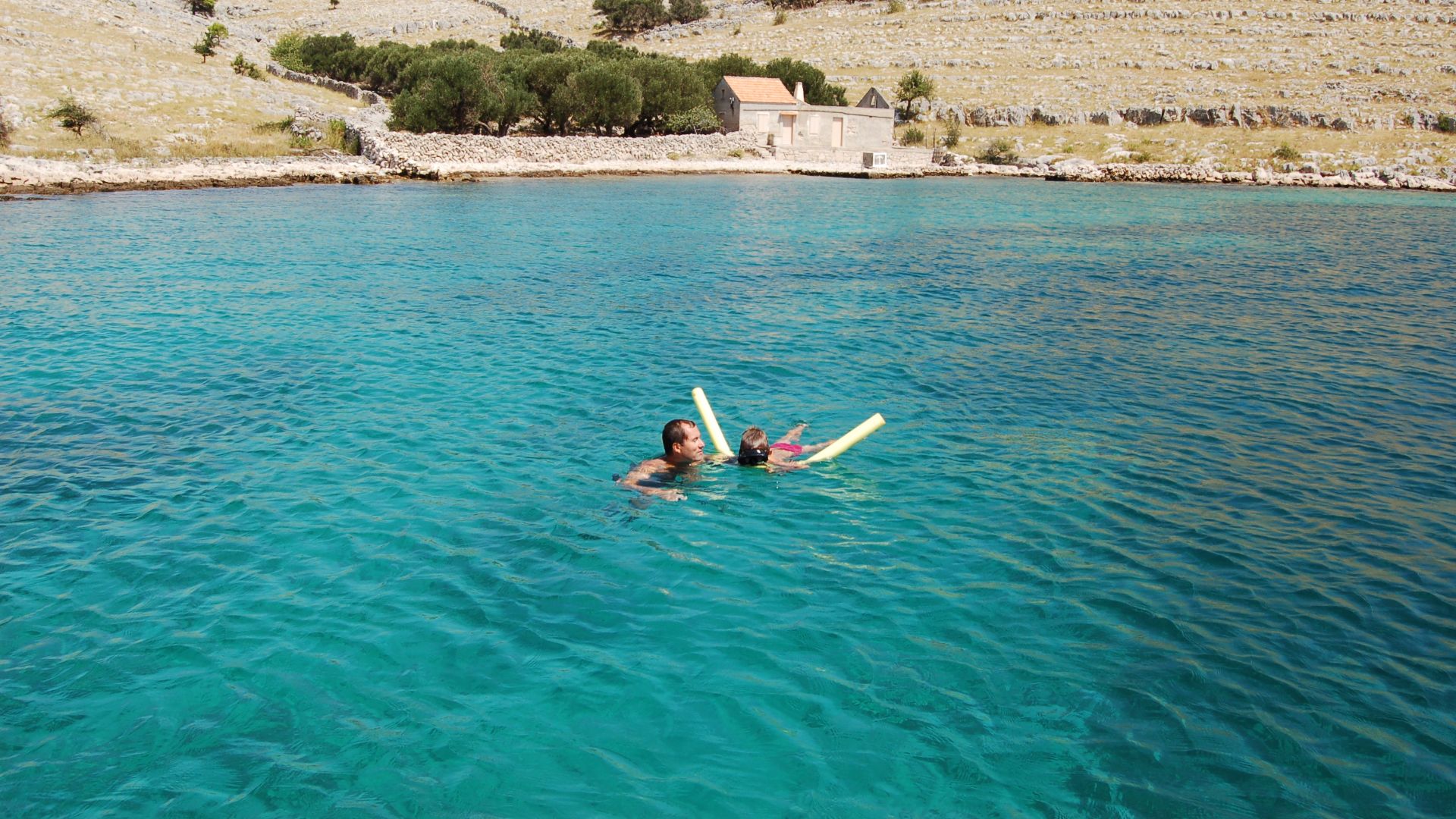 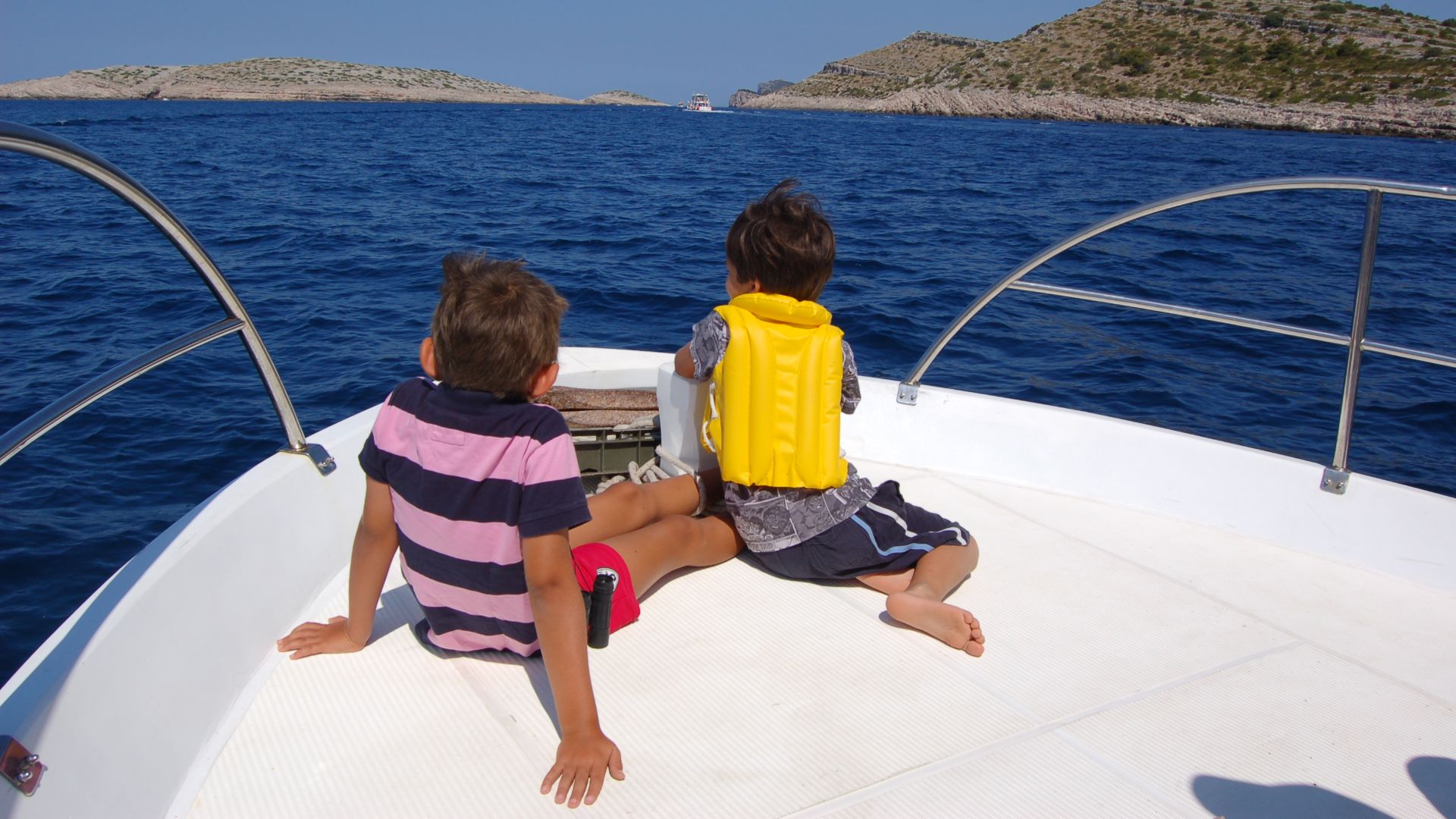 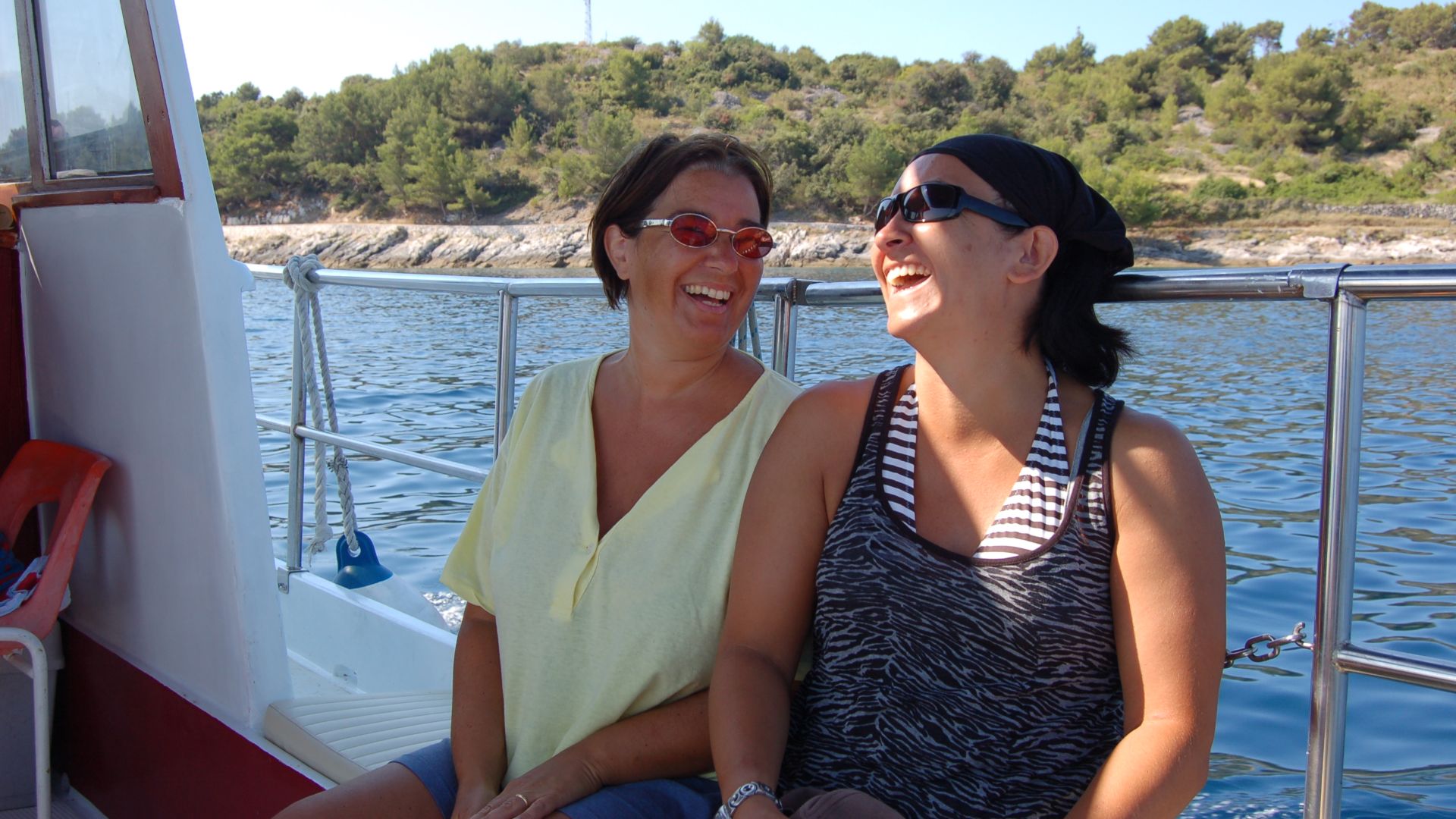 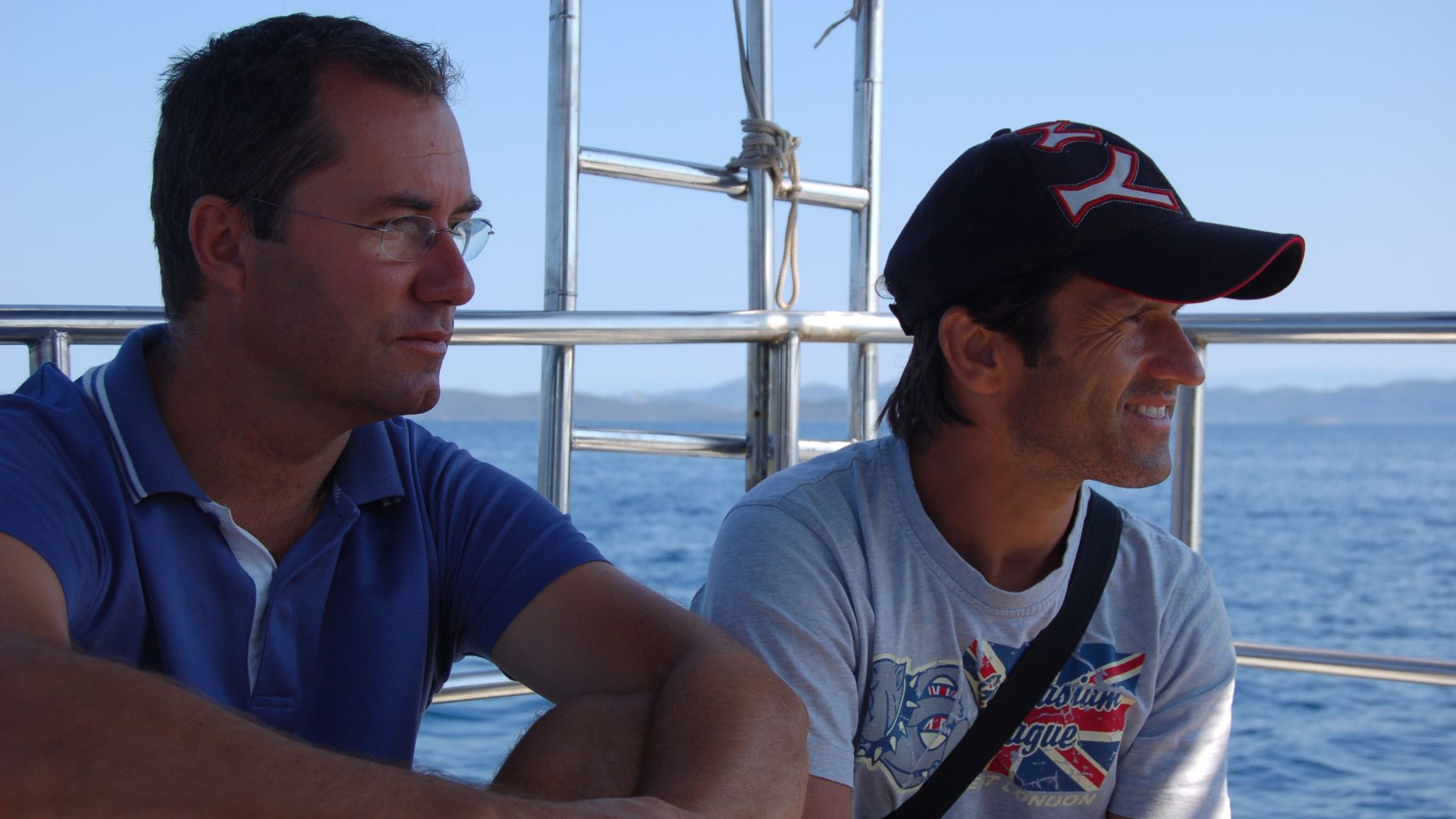 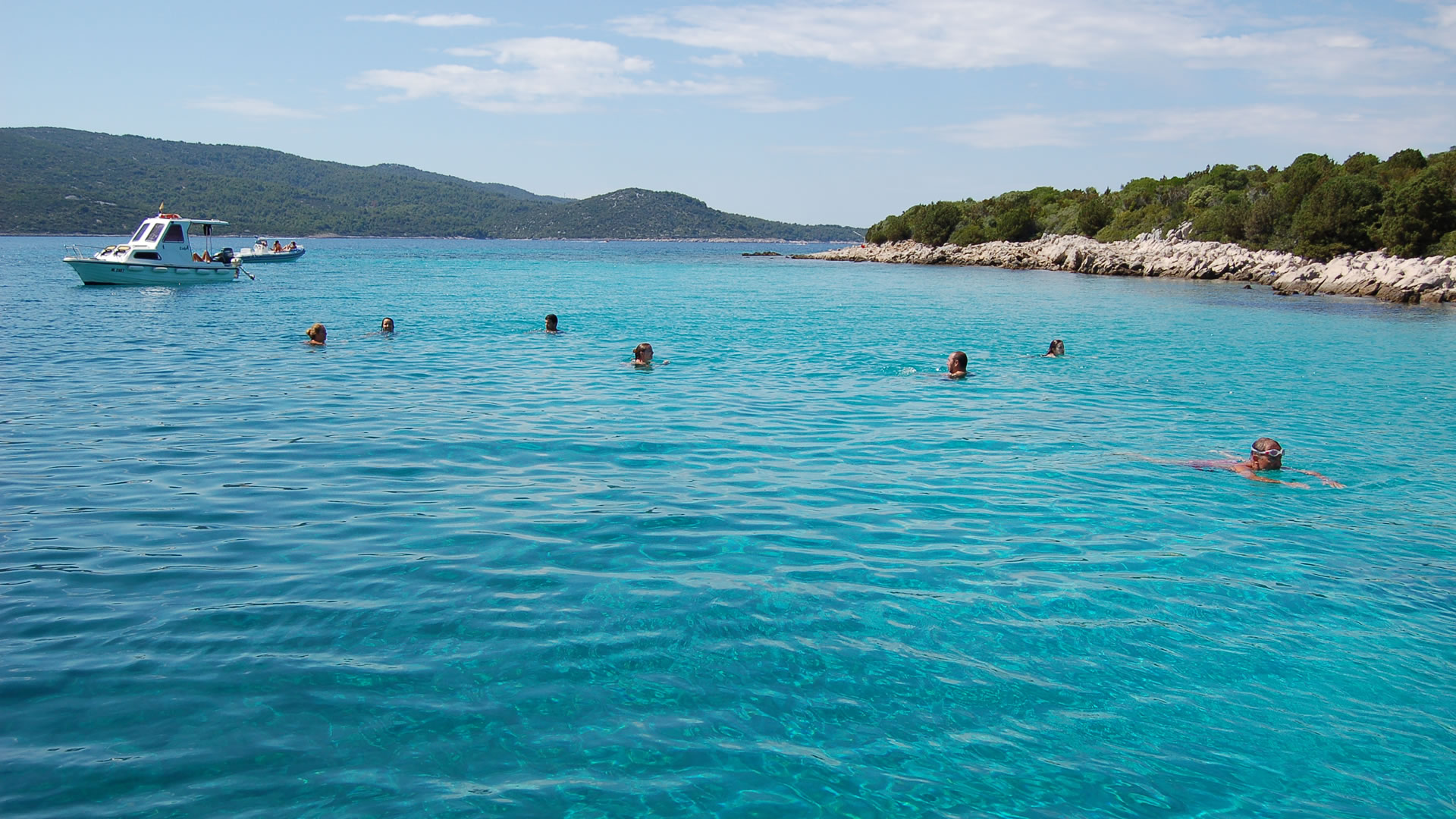 Dugi otok island of Croatia what to visit

Kornati National Park
First organise a wonderful day trip to the Kornati National Park  , the largest archipelago in the Mediterranean Sea comprising 147 islands and islets. Definitely the scenery is spectacular and with a boat for up to 12 people you will sail along its shores surrounded by nature of rare beauty. Soon you dive off the boat, listen to the captain’s stories and relax on board. Besides the trip is run by a family who passionately pass on friendliness and kindness from grandfather to grandson. Later for lunch, you are warmly welcomed and you savour the fish caught in the morning while sitting under the shade in the captain’s house.
Indeed the excursion leads to an experience in a parallel world made of history and peace, of human contact and pleasure.

Telascica Nature Park
Second go to Telascica Nature Park.  In fact the parc is located south of Dugi otok. In this case the Telasica Fjord is a narrow, 8-kilometre-long inlet with five islets. Due to its characteristics, it is a good protected natural harbour, where boats find shelter against the winds. While on the open sea side, the mainland and its cliffs disappear into the deep blue Adriatic. Here, the highest cliff measures 161 m. Without a doubt it is also possible to reach and visit this area within a 50-minute drive from our Gorgonia Apartments.
Surprisingly just below sea level there are corals, gorgonia, sponges, crabs, fish and dolphins. Moreover many species of birds also nest on the cliffs, such as the hawk. However the salt lake Mir is located in the southern part of the park. Because the water is salty as it is connected to the sea, and since the lake is 6 metres deep, in summer you can swim in the warm waters, which are also said to be therapeutic.
Yet for visiting the park, we suggest coming in the early morning or late afternoon to avoid the crowds of tourists. Finally, don’t forget to bring an apple for the donkeys of the Telascica Nature Park.

Snorkelling on the wreck Michele
Third  reach the wreck as the seabed on which it lies is located north of Dugi otok near our vacation rental. Certainly you can take our kayak and set off early in the morning when the sea is completely flat. At this point snorkel in shallow, wonderfully coloured waters and be enchanted by the myriad of marine species living around this large submerged ship.

The biggest lighthouse of Croatia
Next climb up to the lighthouse, located north of Dugi otok close to Veli Rat. Eternally it stands on a rocky promontory and was erected by the men of the Austro-Hungarian Empire. Immediately a spiral staircase takes you up to the top where you can enjoy an incredible view. Just think that on days when the noth wind blows and the air is crystal clear you can even make out Monte Conero above the italian city Ancona, which is 60 miles away.

Visit the Bay of Lucica
Then go further to the Lucica bay. In fact here there are two wrecks in really shallow water. In any case in this inlet you can not only swim and snorkel but also find a snack at the campsite.
For example you can reach the bay in about ten minutes on foot from the apartments, or if you want to fully experience the sea, you can go there by kayak.

Golubinka Cave in Dugi otok
Following this go to this incredible cave where you can see all shades of blue. However, it can only be accessed from the open sea, which is why you should only go when the sea is absolutely calm. Surprisingly the entrance to the cave is high and narrow, but as you proceed by swimming or kayaking you will catch a glimpse of the pebble beach. In fact, the peculiarity of this place is that the sun’s rays penetrate from the hole at the top. Positively it is precisely this characteristic that gives this spot something magical.
Firstly, we recommend a visit in the morning because the sea conditions are better. Secondly, it is easier to find a parking space close to the Brbisica beach, because in the afternoon it is crowded.

Cave Strasna Pec
At this time visit this cave which name literally translated means Terrible Furnace. In fact because it has ancient origins, we recommend a visit to learn about the history of Dugi otok. Indeed it is believed that the first inhabitants of the island lived here. Naturally Strašna peć has a monumental entrance 10 metres wide and 7 metres high. Futhermore as stalactites and stalagmites combined create the space like the arches of a Gothic cathedral. In brief the sight of this place is astonishing. Moreover, the entire cave has a romantic touch.

Sakarun one of the best beaches in Croatia
Absolutely it must be said that this stretch coastline of Dugi otok is a gift from nature and offers enchanting colours. Indeed, we have the green colour of the maritime pines that provide shade on hot summer days. Then we have the turquoise colour of the gently sloping sea. Finally, we find the white of the sand lying on the seabed.
However, we must point out that in recent years we find less and less sand on the shore due to storm surges. In addition, we should remember that Sakarun beach is located in a Nature Park and therefore flora and fauna are protected, such as the poseidonia.
By the way, you can read more about Sakarun in our blog.

Submarine Tunnels
So if you want to experience adventure in Croatia, here you are in the right place! These submarine bunkers  were built by the Yugoslavian army in 1970 to protect submarines from enemy air attacks. Accordingly, there are three of them in Dugi otok. In brief arm yourself with a torch and go in feeling a bit like Indiana Jones in one of his films.
On the whole you will find submarine tunnels in the village of Bozava and the village of Dragove.

Zadar
Take the case of the coastal town of Zadar  that has much to offer and is definitely worth a day visit. For instance this city of Croatia is located in northern Dalmatia. Before, in ancient times, the city was built under the influence of Roman urban rules, which is why the streets are still perpendicular and the urban system of the centre takes the form of a rectangle.
After, in the third century, Zadar had its own bishop and the Christian community took root in the city. At that time, its walls were reinforced and the four city gates were built, serving as the entrance to the old town. As a result, the urban appearance of ancient times is maintained to this day.
Definitely we like this city a lot and if you are interested, read what to see in Zadar in one day.

To conclude we have given you some suggestions on what to do in Dugi otok during your holiday on the island. Summing up we leave you with
this blog 7 days in Dugi otok.