Sakarun beach on the island Dugi otok takes its name because of its bag shape, „saka“ in old dialect; some of the elders also say because its sand is reminiscent of the Sahara desert. The beach is located in the north of the island, where the land slopes gently into the sea. The bay is a little less than a kilometer wide and is partly surrounded by pine trees.

Sakarun over the years attracts many tourists because it is one of the few sandy beaches in Croatia. The entire area around the bay is part of a Nature Park and for this reason the institution protects the flora and fauna. This also includes the neptune grass, an essential plant for our sea, but not too loved by tourists. The neptune grass with its leaves creates natural barriers on the seabed, which is home to fish. These plants, besides giving oxygen to the sea, reduce the speed of the sea currents and protect the coast from the erosion of the sea mainly during the big storms of the cold season, since the roots penetrate deeply reinforcing the surrounding soil.

The following aerial picture shows the dark patches of poseidonia in the sea. 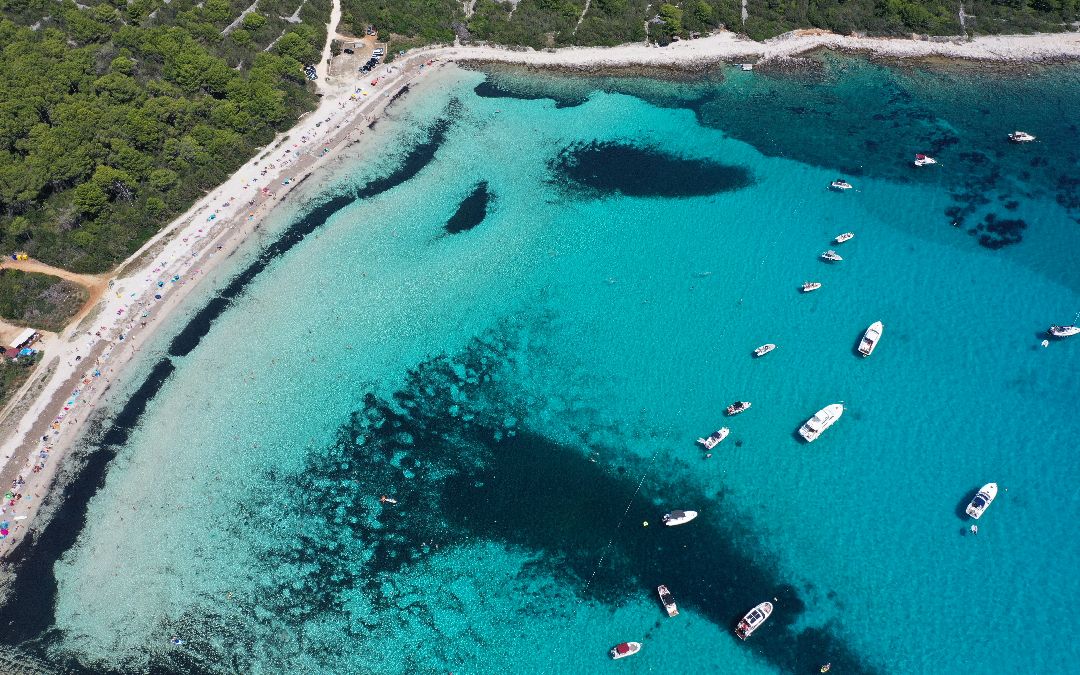 Sakarun beach how to get there

The beach can be reached on foot from the villages of Soline and Verunic. From the large crossroads there is a path (visible on the photo below on the right) that in a few minutes reaches the sea. From Soline it takes 15 minutes of walking, from Verunic 20 minutes. If you arrive from the village of Veli rat, follow the road sign marked with a large sign.

If you arrive by car at the entrance to the beach there is a large parking lot for a fee, partly covered by pine trees.

It is not advisable to come to Dugi otok by car for only one day. In that case it is better to make the crossing from Zadar with the ferry of Jadrolinija consulting the timetable https://www.jadrolinija.hr/docs/default-source/local-lines-2021/zd/434-brbinj—zadar-(2021).pdf?sfvrsn=2
From Brbinj the bus will go north. Ask the driver about the return trip.
Reaching Dugi otok by boat is particularly pleasant, but remind that you must moor off the beach Sakarun: the row of buoys marks the space reserved for bathers. The bay is exposed to the south and if the south wind „Jugo“ is not expected it is nice to spend the night moored. In the evening a fee will be charged for mooring. 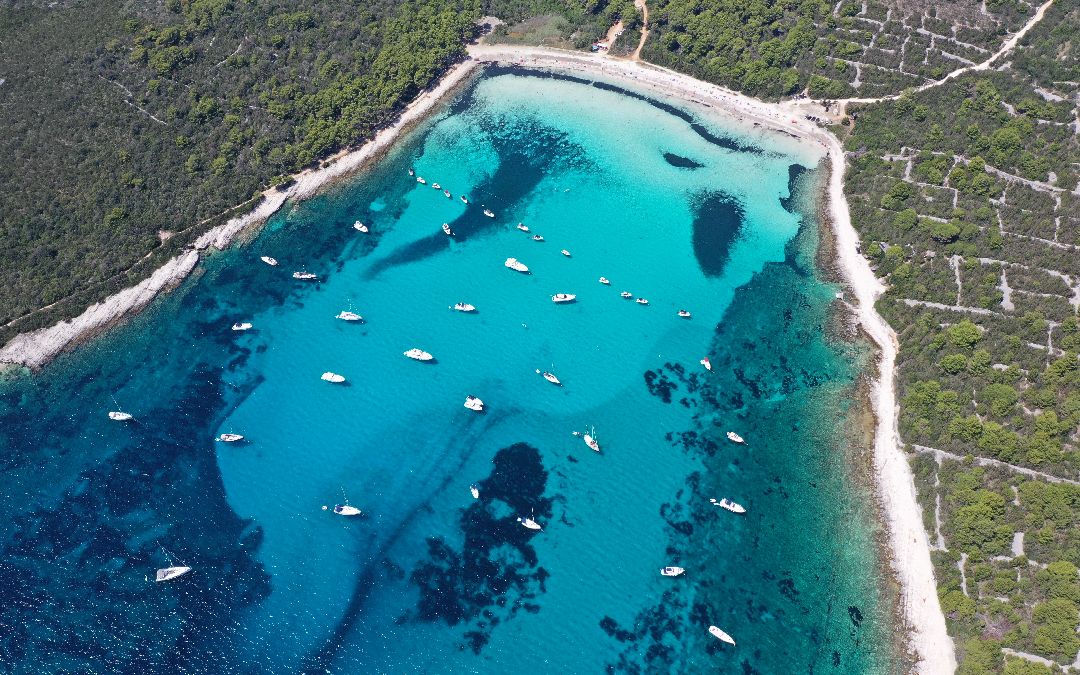 There are a variety of drinking and eating opportunities in Sakarun. All venues open in June and generally close at the end of September. So if you visit the beach outside of these months, it is advisable to bring a snack and a bottle of water.

The restaurant Amarcord is very nice, run by Bea and her husband Darko and is in the pine forest. So after lunch you can find a nice shelter in the shade of the trees. The swing that hangs from one of them is an attraction for the many children.

In the center of the beach there is a bar run by the gentleman who controls the parking lot, while Hotel Bozava runs the other bar in the corner of the beach. This also provides a connection between the hotel and the beach by a tourist train. Using this transport can also be an idea for a half-day trip to the village of Bozava, where you can take a long walk by the sea. The fourth place offers drinks and palacinke, a typical Croatian sweet filled with jam or chocolate.

Nearby Sakarun is the Grill Gorgonia https://www.gorgonia.hr/grill/ within walking distance; by calling 00385 91 7379823, even via whatsApp they will come and pick you up. 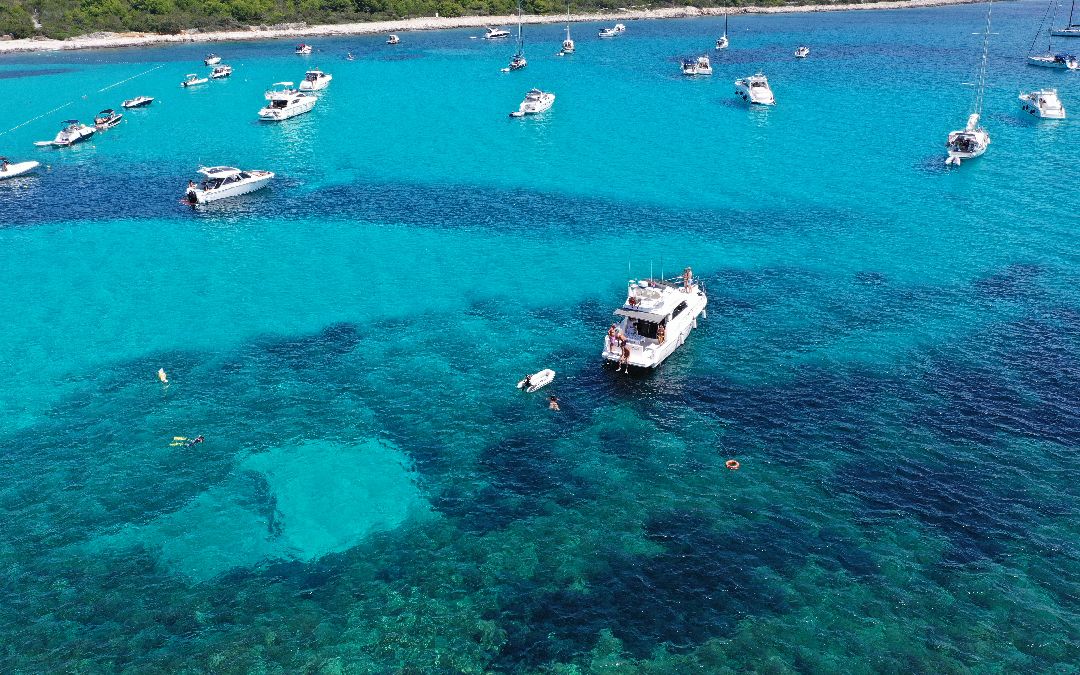 It is really worth to take a walk and leave the beach. Walking towards the right side of the bay you will arrive at Cape Lopata. The path runs along the sea and you can get there even with flip-flops, although a pair of sneakers will be more comfortable. As you can see from the photo below Lopata is a small peninsula. The inner cove of round pebbles is lovely, although it offers no shade. Bring an umbrella and something to drink.

The outer bay allows you to look out over the open sea and in the evening you may even see dolphins.
If you feel like walking, the walk continues along the sea until you reach the small village of Polje. From there, following the asphalted road, you return to Sakarun.

At the promontory of Lopata you can breathe in good scents: a mixture of saltiness and smells of wild plants. Standing in this place you`ll  recognizes the traces of the force of the sea on winter days. Part of the coast is white, without vegetation. A beautiful contrast of colors for the eyes!
The sea in this stretch lends itself to snorkelling: the seabed is interesting and if you are lucky and patient you might see some nice fish. 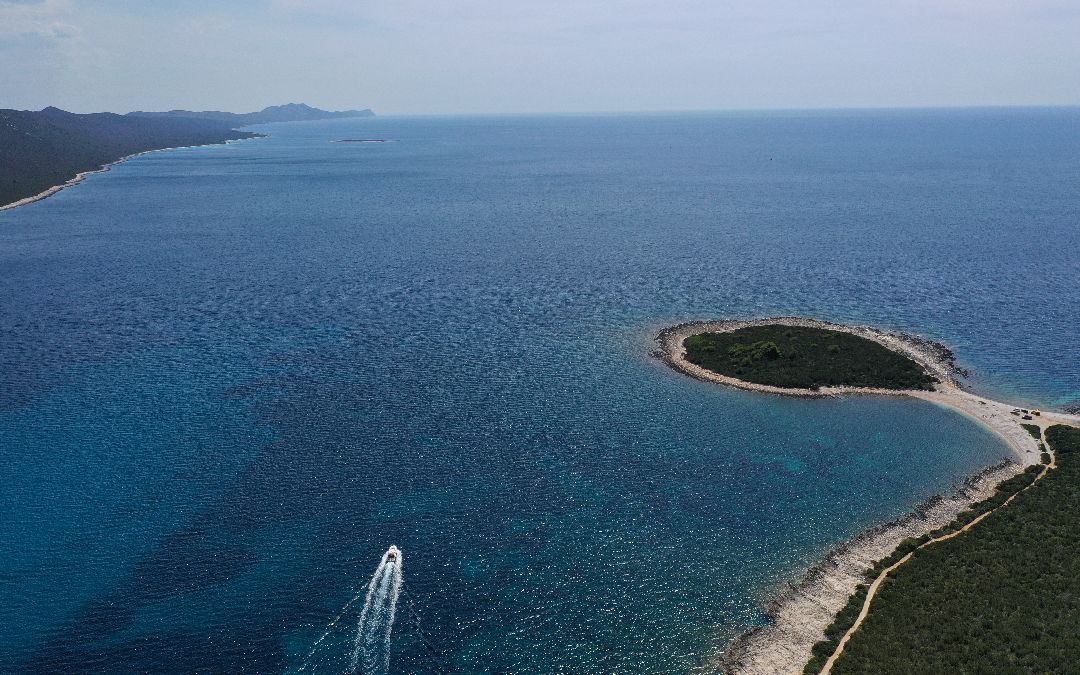